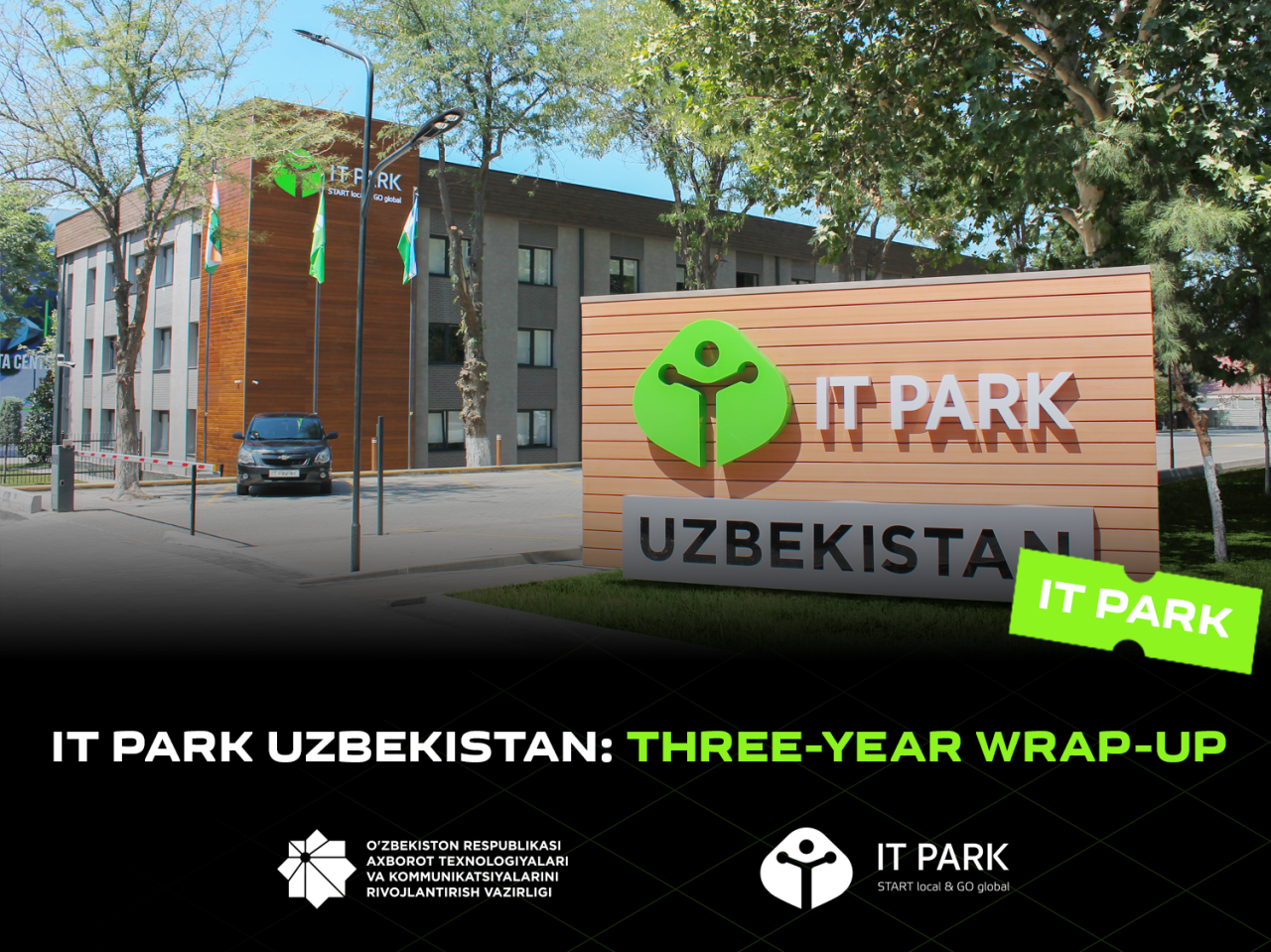 On July 24, IT Park turned 3 years old. In just 3 years of its existence, it has turned from a small organization into the largest IT hub in Central Asia.

How did the idea to create IT Park come about?

The initiative to create IT Park belongs to the President of Uzbekistan Shavkat Mirziyoyev. During his first official visit to India in 2018 as head of state, agreements were signed on expanding cooperation, including in the field of information technology.

Shavkat Mirziyoyev expressed interest in establishing an information technology park in the country in cooperation with Indian IT companies based on their best practices in software development and start-up acceleration.

So, on July 24, 2019, a solemn opening ceremony of the first IT Park in the country was held in Tashkent.

For the past three years, IT Park has been making a huge contribution to the development of the startup ecosystem, the growth of domestic IT companies, and education. It has a significant impact on the development of high-tech areas and the formation of the field of information technology.

But if we talk about the effectiveness of the organization, then the best indicator will be the numbers. Thus, the annual volume of exports of IT products by IT Park residents is growing exponentially. For example, according to the results of the first half of 2022, the volume of exports of residents increased 4 times compared to the same period last year and amounted to $ 50.0 million, and the volume of services rendered amounted to 1900.0 billion soums.

In addition, other indicators confirm the effective work of the organization:

• number of resident companies - 744, of which 107 are international IT companies;

• in total, IT Park supported 760 startups, of which more than 11 million US dollars were invested in 118;

• the number of IT-specialists in resident companies - more than 15,000;

• 205 IT Centers, where more than 80 thousand students have been trained in 10 areas;

• more than 100 educational IT projects;

• the first online university in Uzbekistan - IT Park University, created jointly with one of the world's largest IT companies - EPAM (Software Engineering; 3 years of study);

• IT education support programs - a program of compensation for up to 50% of the costs of international IT certificates (it-istedod.uz); grant program for IT training centers (IT Bilim);

• 34 incubation centers in universities throughout Uzbekistan;

• tax and customs incentives to support IT entrepreneurship (income tax, all taxes, unified social payments, all domestic transactions and payments in US dollars, customs payments for imported goods and services);

• IT-complex in Tashkent of 17 high-rise buildings on more than 6 hectares;

• close-knit team, which already employs about 600 specialists, whose average age is 30 years.

IT Park makes a huge contribution to the popularization of IT education.

One of the important initiatives of IT Park was the creation of Incubation Centers at universities throughout Uzbekistan - by now their number has reached 34. Thanks to the incubation centers, students have the opportunity to interact with mature and successful IT companies and gain invaluable experience that will remain with them for the rest of the life.

Startups who successfully complete these programs end up with not just an idea in their head, but a finished IT product that has every chance of attracting investors and business angels for its development. And, most importantly, to scale the idea across the country.

More than 24 such programs for incubation and acceleration have been held since the founding of IT Park, more than 350 startups have successfully completed these programs.

The total number of startups supported by IT Park in their projects is more than 760. Financing of startups has amounted to 123.8 billion soums since then.

In addition, various hackathons, ideaathons and competitions are held throughout the country to identify and support talented youth. Directions - from financial and agricultural technology to artificial intelligence technologies. To date, a total of 700 events have been organized with the participation of over

IT Park operates 205 IT centers (digital technology training centers), which are available in all regions of the country. In IT-Centers you can take courses on specializations: computer literacy; in-depth work with MS Office; web programming languages; fundamentals of graphics and design; creation of mobile applications; programming language Python; mobile robotics based on Arduino and LEGO Mindstorms.

In addition, in November 2019, together with the United Arab Emirates, the One Million Uzbek Coders (OMUC) project was launched.

The OMUC project was a free online platform. It was launched with the aim of teaching the population the skills of programming and working with digital technologies. The platform covers the four most popular areas: data analytics (Data analysis), android development (Android), front-end development and full-stack development.

In 2021, for the graduates of One Million Uzbek Coders, in partnership with the United Arab Emirates, 3 competitions were held with a total prize fund of $100,000 - Sports Programming Championship, Open Data Challenge and Students Cup.

Among the active participants of the project, an online competition with a prize fund of $6,000 was also held, in which

12,000 people. In 2021, 100 best computer science teachers of secondary schools were awarded, who completed advanced training courses as part of the One Million Uzbek Coders project. In addition, within the framework of One Million Uzbek Coders, 7 qualifying rounds were held and the owners of 250 Nanodegree grants for IT education were determined.

In June 2022, IT Park and together with EPAM founded the first online university in Uzbekistan, IT Park University. The university program is aimed at obtaining modern and sought-after professions in the field of IT. Education will be conducted in a hybrid, mostly online format, which will allow students from all over the country to receive a specialty without having to move to the capital.

It will be possible to study at home or at IT Park offices (in the capital or regional). The duration of the undergraduate program is 3 years, the main language of instruction is English.

Also, with the support of the Ministry of ICT, IT Park launched a program under which you can receive up to 50% compensation for the amount spent on obtaining an international IT certificate.

Compensation can be received by citizens of Uzbekistan aged 14 to 30 years, no later than 180 days from the date of receipt of the certificate, by filling out an online application and attaching all the necessary documents.

Over the years of its existence, IT Park has been able to make a significant contribution to the development of IT business in Uzbekistan by providing benefits and preferences for IT companies, comprehensive support and attraction of international orders, as well as investments.

To receive benefits and preferences, IT companies and IT training centers can become IT Park residents.

• Residents are exempt from paying all types of taxes and mandatory contributions to state trust funds, as well as social tax;

• Residents are exempted from paying customs duties (except for customs fees) for equipment imported for their own needs, components, parts, assemblies, technological documentation and software not produced in Uzbekistan;

• Income in the form of wages received by employees under employment contracts with an IT Park resident is subject to personal income tax at a rate of 7.5% and is not included in the total annual income of individuals for tax purposes.

In addition, IT Park resident companies that operate in the field of IT education can receive a targeted loan. The mandatory conditions for obtaining a loan also include a guarantee of employment for students of the educational course.

The size of the target loan issued depends on the number of trainees planned to train and employ students. The term and annual percentage of the loan is determined by the conclusion of a specially created Expert Council.

In February 2022, IT Park announced the launch of the TashRush program. The relocation program is aimed at attracting IT companies, as well as IT specialists, to Tashkent.

As part of the relocation program, a set of services is provided for IT professionals and their families, aimed at helping them settle down in the country as comfortably as possible. The basic free list of services includes: providing, if necessary, visa support; airport transfers and transport; organization of meetings with public and private companies; assistance in finding employment in large IT companies.

In addition, they are assisted with consultation in company registration; assistance in the selection of qualified employees; allocation of office space with all amenities on preferential terms, etc.

To date, the number of IT specialists who have arrived in the country as part of the relocation program has exceeded 6,000 people.

In parallel with the Tash Rush program, IT Park launched IT-Visa. It provides several advantages, for example, unimpeded entry and exit to the territory of Uzbekistan for up to three years, the purchase of real estate of any value and a simplified procedure for obtaining a residence permit, as well as access to medicine and education, on the conditions provided for citizens of the Republic of Uzbekistan.

Three categories of people can get such a visa:

— investors who invest in the IT sector (to obtain a visa, they will need an application from local partners);

— founders of technological companies-residents of IT Park;

— IT specialists whose annual income for the last 12 months amounted to at least $30,000;

Foreign representative offices of IT Park

It should also be noted that on August 18, 2020, an IT Park representative office was opened in Delaware, USA, which provides domestic IT companies with the conditions to enter the US market.

The main mission of the representative office is to create favorable conditions for the export of domestic products and services, carrying out the tasks of promoting them, conducting advertising campaigns, searching for orders, facilitating the conclusion of contracts between US customers and IT Park residents.

There is also a representative office of IT Park in Latvia. On February 9, 2022, as part of the first Uzbek-Latvian business forum, held during the visit of a delegation of government and business circles of the Republic of Latvia to the Republic of Uzbekistan, a memorandum of mutual cooperation was signed between IT Park and the Latvian company Shipleart (AP Holding).

The signed memorandum made it possible to develop the export potential of IT Park residents in the markets of the European Union, receive assistance in attracting EU funds, as well as venture financing for projects of IT Park Uzbekistan residents.

In August, the IT Park representative office in Germany begins its work.

“We see what conditions the government has been creating for the development of IT in the republic in recent years. IT Park was established thanks to the efforts of the government. This is not just an organization, it is a huge platform for the implementation of ideas and projects, it is a center of the IT sector of the whole republic and even the entire Central Asian region.

We must understand that IT is developing rapidly and is not going to stop, just like the IT Park. I am sure that the most successful projects and achievements are yet to come!” – highlights the CEO of IT Park Farkhod Zairovich Ibragimov.